In September of 2013, I read the picture book Firebird by Misty Copeland, illustrated by Christopher Myers. I knew of Misty through my interest in ballet, but the world would come to know and love her the following year when her book would go on to receive the Coretta Scott King Award for best illustrated book and she would receive the Jack Ezra Keats New Authors Award Honor.

Misty’s ‘Under Armor’ sportswear ad would inspire millions as her ballet school rejection letter was read aloud, belittling her late age and too large frame (code: too black) as she danced with power and grace in defiance of her critics. As her commercial went viral, so did her popularity. She was on the cover of Time Magazine in their ‘100 Most Influential People’, she performed for President Obama, she toured with Prince, she guest-starred in a hit Broadway musical and finally she achieved her dream of becoming the first African-American prima ballerina in the ABT’s (American Ballet Theater) 76 year history.

She will also be celebrated for her visit at The Dalton School, where she read her book aloud to students K-3, although this may be low on her list of accomplishments. 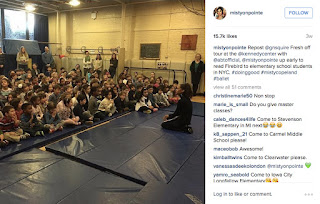 Actually, I take that last part back.

Two years ago, I swallowed my hesitation of reaching beyond my realm and contacted her publisher for a visit. I told myself, “We’re not all that different.” I’m a New Yorker, she’s a New Yorker. She wrote a picture book, I’m a librarian. She mentors young children of color, I teach K-3 students at an independent school with a mission of equity and inclusion.

What is the harm in trying to dance with the Firebird? Why not reach for the stars?

At the time, I believe I may have been one of the first school librarians to contact her about a visit. To my amazement, Misty wanted to come! Perhaps because I asked Misty before she became world famous, perhaps because her I asked her before she became and award-winning author. I can speculate forever, but I think the main reason is the one that is the most obvious – a librarian reached out and asked her to share her inspiring stories with a school of young children, and she said yes!

Although I always do my homework for author visits, I went above and beyond for Misty.  I researched the rest days and off-season for ABT performers, I asked my administration for car service recommendations, I helped facilitate the largest signed book sale in the Lower School’s history. I created a multimedia presentation to introduce her visit. When I googled what she might like for breakfast upon arrival, I decided to reign it in a bit.

All of it was worth it. While there was an undeniable element of being star struck by someone whom I have admired from afar, in the end we both had the same mission that day. We both wanted to enrich the lives of children by introducing them to someone who had an inspirational story about their determination and victory in the face of rejection and prejudice.

The great space between us grew closer. Misty admired our library, she gushed over our students and she marveled over the intelligent and thoughtful questions our children asked her. She spoke to them kindly and she hugged them freely. There has been no question that Misty Copeland has received many accolades, however reading her book to my students and sharing her story isn’t a small one. After all, it took one afternoon at a Boys and Girls club to introduce ballet to a young Misty Copeland and change her life forever.

Who knows what great things my students may accomplish after one morning when they were introduced to Misty Copeland? 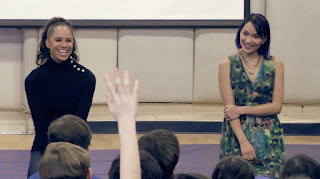